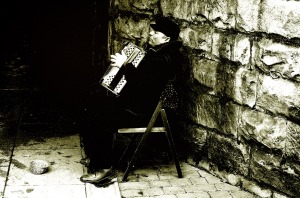 Inky’s Take:  Music.  One of my sincerest loves.  The one gene I did not inherit from my Irish ancestors, making me the only one within my immediate  family who failed to capture that prolific scamp from the ancestral tree.  When it comes to Inky and painting silence; I relate it to a passage from Me Talk Pretty One Day by David Sedaris

‘Hugh consoled me, saying, “Don’t let it get to you. There are plenty of things you’re good at.”   When asked for some examples, he listed vacuuming and naming stuffed animals. He says he can probably come up with a few more, but he’ll need some time to think.’

…and that, my dear friends, would be a bullseye!

I am a writer by night, contractor by day, and an eclectic, always. Just call me Inky. I began this blog as an outlet. A place to explore things that struck me as interesting, funny, inspirational, and just plain silly. I wound up spilling quite a bit of Glenlivet laced blood as well.

You are welcomed to join me on my explorations. Pull up a keyboard, I'll make you a drink. Coffee, or Glenlivet? Both? You got it.

I want to be rich. Rich in love, rich in health, rich in laughter, rich in adventure and rich in knowledge. You?

I Suck at Writing

You're a great writer. You just don't know it yet.

Where inspiration and creativity meet

Your Source For The Coolest Science Stories

I have people to kill, lives to ruin, plagues to bring, and worlds to destroy. I am not the Angel of Death. I'm a fiction writer.

Writer To Writers
Momentary Lapse Of Sanity
The Manuela Diaries

The crazy, wonderful journey of my life

Poetry and Writings - A Mind

The Power of Story

Mindfump
Some Words That Say What I Think

a collection of words about my average, bog-standard life accompanied by some sub-par illustrations that depict selected moments in said life

The Casual Way to Discuss Movies